So, I DID promise to tell you a bit about where on earth I have been since late March, and why I haven't been on here telling you all about the end of Sale-a-bration, and the end of the Weekly Deals as we know it, and the Retiring Products and end of our 2016 catalogue.

Well, in the lead up to my husband's first full Ironman event, we decided to take a long weekend and head across the ditch to catch up with some family. Since his dad passed, we have felt it more and more important to stay in touch with the New Zealand side of his family and re-connect with his roots.

And the Kiwi's are SO hospitable!

It was very much a flying visit, but I think we caught up with about 30 relatives in under four days!

And we managed to fit in some recreation and inspiration at the same time.

We went with his gorgeous cousin and dear aunt to a garden centre for lunch - and I have to say, I was REALLY, REALLY taken with this beautiful wall art! 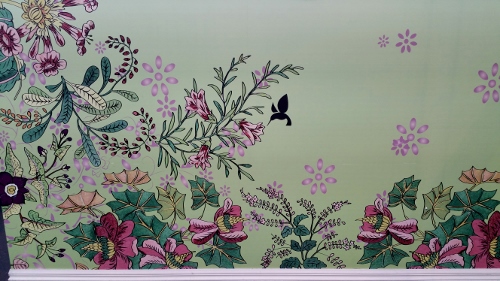 How stunning is that? And SO many Stampin' Up! colours in there! I can't wait to make something inspired by it!

After our lunch, we had a wander through the garden centre shop and OMG! Look what the heck I found! 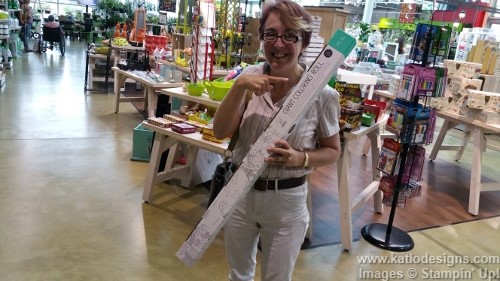 Now, for some reason I seem to have collected a few of those exciting new adult colouring in books, but I've never coloured in any of them, however, this got me really excited! Ha ha! Have you done any colouring yet?

We managed to find a time slot to have a swim in the stunning new Millenium Swimming Pool, which was quite a miracle since every amazing swimmer in New Zealand was there trying to qualify for the Rio Olympics. We also got to see Tony's young cousin play a couple of awe-inspiring water polo matches in the same pool on the Saturday.

We wanted to fit in a long run (for the Ironman training) while we were away, so we headed north to the Orewa Lagoon and did a lap of the lagoon and half a dozen laps of the gorgeous beach, clocking up 23kms in the stunning conditions. If you're ever in the area, the beach is lovely and a walk around the lagoon would be a beautiful way to pass a couple of hours!

When we arrived back in Melbourne, I really wanted to make a thank you card for each of the households who hosted us or went out of their way to catch up with us over that weekend. I had a bit of a search on Pinterest and found some punch art Kiwi cards, which I thought were very cute, so I decided to create a handful of similar ones. 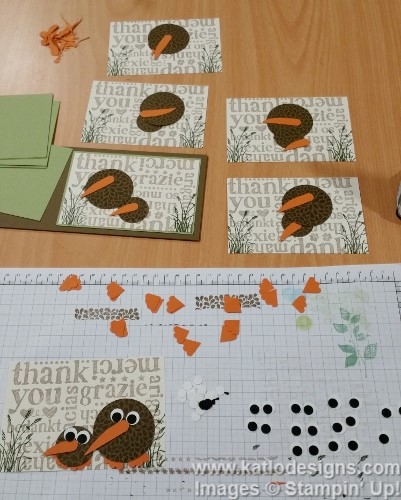 To start with, that's a lot of circle punches, and lots of "eyes" from the Owl Builder Punch.

I used the "A World Of Thanks" stamp for the background and the grass image from "Wetlands" stamp set. 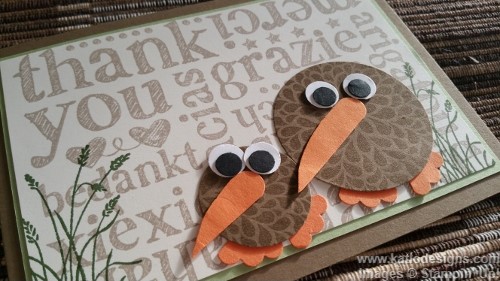 Each card was just ever so slightly different, depending on the placement of the eyes and beaks of the kiwis. So much fun and I love how they came up!

I got some lovely response from over the ditch too, so how nice is that - to have ones creations appreciated!

I felt we were no sooner back from Auckland than I headed to Sydney for a long weekend for the Stampin' Up! On Stage event where we had our Product Premiere and new Catalogue Launch. I'll be back to share some of that excitement with you in a day or so!

Here's a really fun card, to celebrate a lovely family member who decided on a career change late last year and has just graduated from the Victorian Police Academy!  How proud are we, and how much fun was this card to make?!? 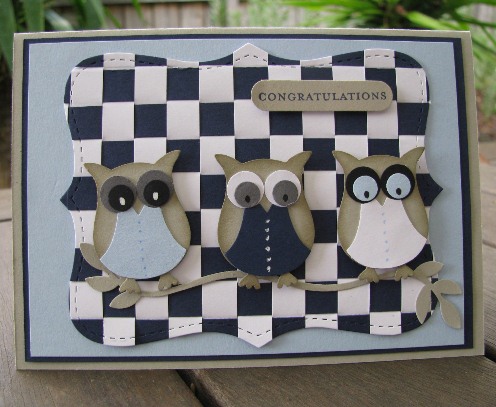 I started out trying to make police caps for them, but the weaving for the cheque band around the cap was so small as to even be ridiculous for someone like me to try! I know I am mad, but I am not THAT mad! LOL

So the compromise was a woven Night of Navy and Whisper White background which I then cut with the Top Note Die and the Big Shot.  Love it! 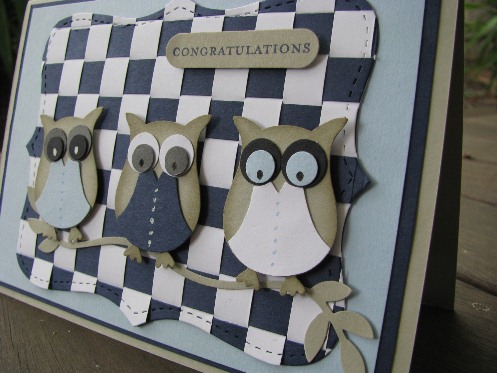 These ones are punched in Sahara Sand card stock with the edges just ever so slightly sponged with a dauber. I think I'd have a hard time keeping a straight face if these guys pulled me up for a random breath test!

If you're interested in making some cards similar to this, or learning some more advanced stamping techniques, why don't you consider joining my stamp club.  All the details are HERE and we kick off next Thursday night in Croydon North.  Send me an email if you have any questions! or would be interested to join in!  kathryn@katlodesigns.com

A Blog Hop & A Lighthorseman

Welcome to our little blog hop - hope you've been enjoying the journey so far. You may have just arrived here from the blog of my friend Di Dunk - or if you're just starting here, enjoy the little tour! Our group today has focussed on products that are FREE during Sale-a-bration - bet you're lovin' that Designer Series Paper?

I am madly in love with that DSP and today I wanted to do something completely different with it - so I have gone for a masculine layout. YES! With all those pretty florals, I have done a complete backflip from my usual style . 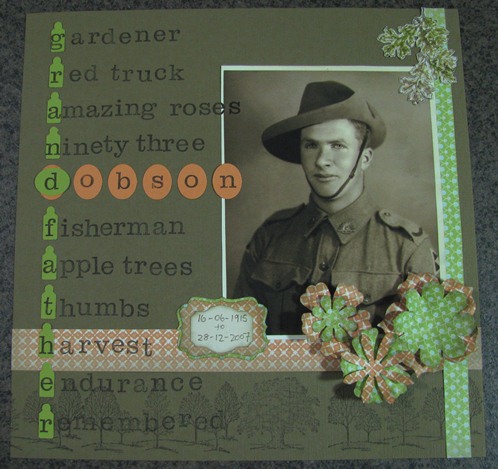 The layout title is GRANDFATHER DOBSON and I have used ACROSTIC POETRY as a way of journalling some memory triggers - quite a few of which only family will understand.  For each of these words there is a long story and many years of memory creating, far too much to put on one 12"x 12" layout.

I am quite tempted to see if I can dig out a few other photos and do some accompanying layouts to complete the story, but of couse, the red truck and the appletrees are now long gone and in those days photos were few and far between . . . 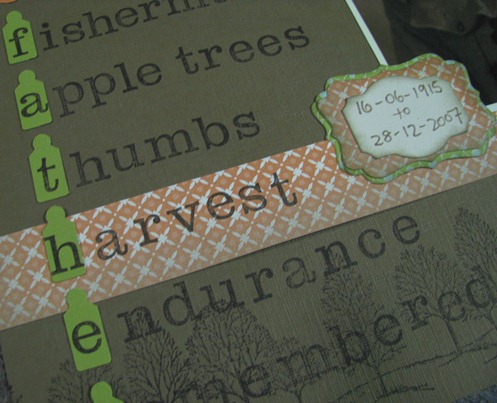 The main colours used here are Soft Suede, Peach Parfait and Lucky Limade with Early Espresso ink. There are some quite symbolic images in the stamping too. The forest of trees, the oak tree and the oak leaf and acorn were all very much significant in my grandfather's life. 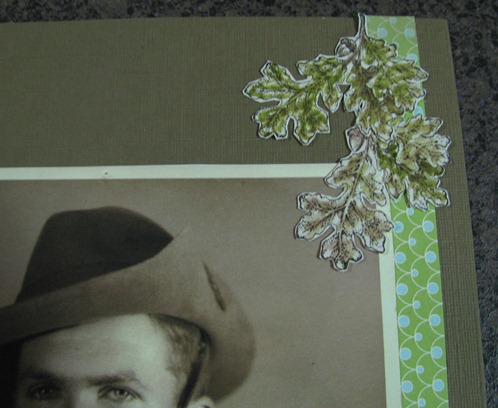 This little snippet of the main photo blows me away! When I went to load it up, there were my youngest cousin's eyes looking straight out at me!  Not bad for about 70 years between!

And since this blog hop is about Sale-a-bration, here's a close up of that gorgeous DSP! 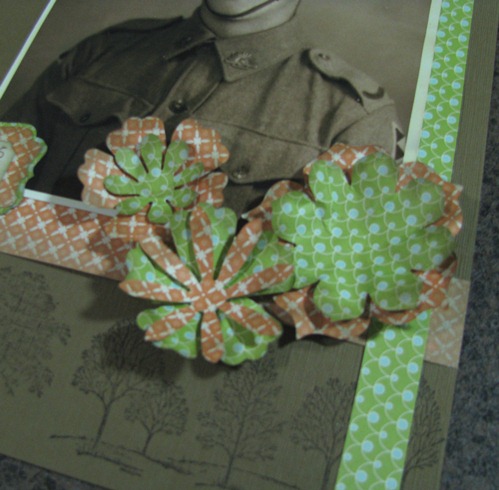 There is actually a tiny finishing touch left to add to this layout - an antique brad in the middle of that largest flower!

Well, that's it from me for today, thanks for visiting! Before you "hop" off to the next person, please leave some blog love in the form of a comment, as I really appreciate your feedback, and then off you go to visit the delightful Sue Madex.

A Day of Remembrance

On this day three years ago, terrible bushfires swept across our state, taking with them the lives of 173 humans, countless animals, domestic and wild, and wiped out over two thousand homes.

There is no single word that can describe that day or the feelings over the next week as those awful numbers kept climbing. Today we remember that long month of hot dry weather, monitoring burning tree stumps, fending off ember attack and pouncing on spot fires and we remember the lives that were changed forever.

But alongside the tragedy of that time, I also wanted to reflect on the good.  Out of the ashes came stories of miraculous survival, and normal, everyday people who rose up to the incredible challenges put before them and out of their acts of compassion and love for their fellow humans became accidental heroes.

There were neighbours, relatives, members of the emergency services and complete strangers who out of the trying circumstances (and without even thinking about it) showed what the human spirit is all about and rose up on angels wings to prove how communities can come together and how even the smallest act of kindness or compassion can make such a difference.

Thank you to all those heroes of Black Saturday. We remember those who were lost, but we also remember those who fought the fires, survived the fires and then fought to keep their communities alive and to support their neighbours and friends devasted lives back to some semblance of normalcy.

Congratulations to all our "New Australians" who receive their Citizenship Certificates in Australia Day ceremonies across the country today.  We had the pleasure of attending such a ceremony in our nation's capital, Canberra, in 2009 - it was such a buzz!  (or maybe that was the 21 canon salute, or the FA-18 flyover!!).

To celebrate today, I have gone hunting through some OLD photos and dug up a favourite project I did in 2005.  I was working on lots of Altered Book projects at the time, and this one had the theme favourite places.  The month's project had to include "windows" in the page, so I embedded acetate sheets between several pages and created some windows which I stamped one of our favourite national emblems onto - yes, the kangaroo! 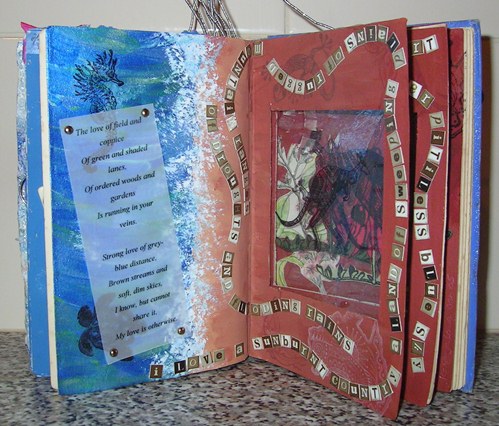 The words are just a couple of verses from the very moving Dorothea Mackellar Poem, My Country, one of my all-time favourites. 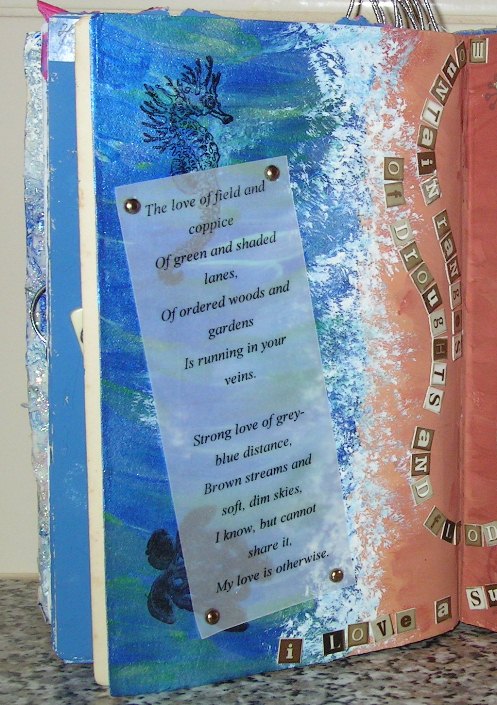 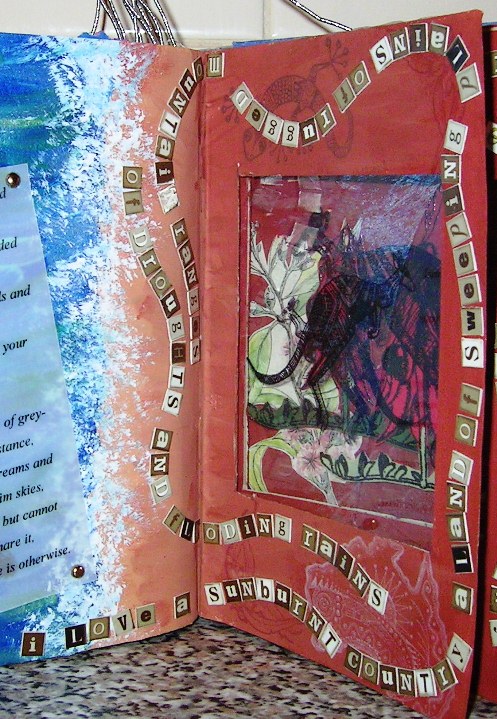 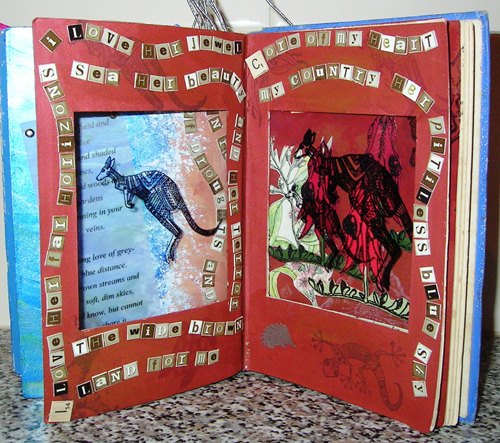 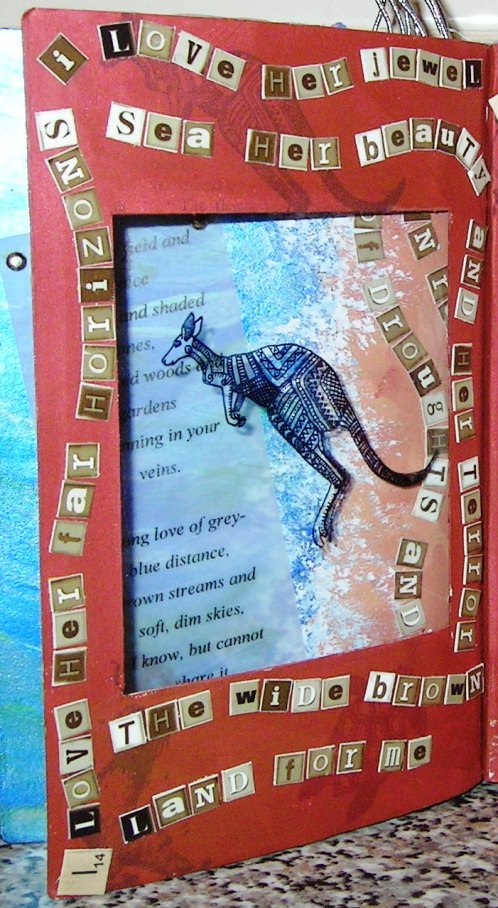 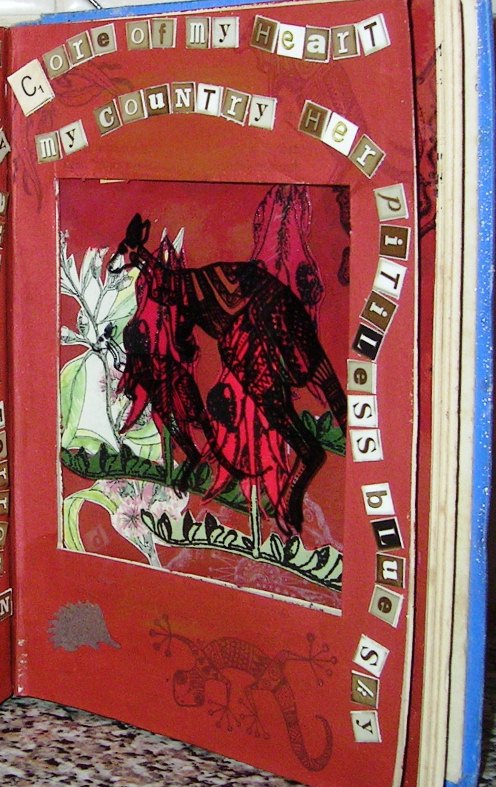 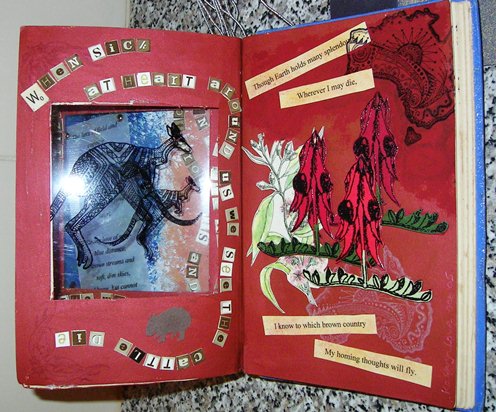 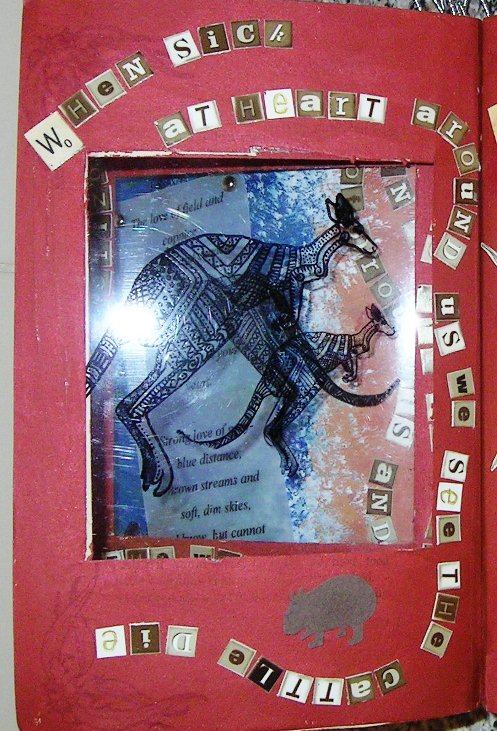 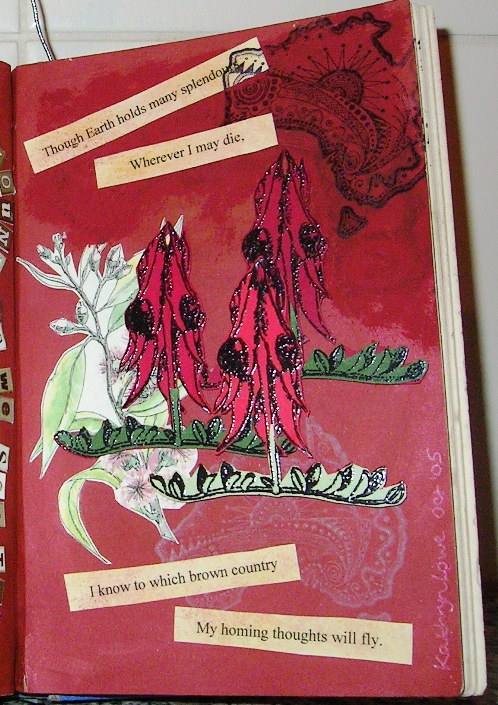 It's like when you walk down those long corridors at Heathrow after a month in Europe and suddenly you see row upon row of flying kangaroos - yes the tails of dozens of Qantas jets, and with tears in your eyes, you realise . . . you're going HOME!!  Home to the best country on earth!

Have a great day - enjoy this beautiful fresh air and sunshine and I hope your day is blessed with beautiful happy family memories!

A Note from Kathryn

Promote Your Page Too

Doing What I LOVE!