You may have seen it below the logo.

This year, Stampin' Up! have re-titled the Annual Conventions to Inspire Create Share events.

We've just returned from four totally awesome days at the Melbourne Convention learning everything Stampin' Up! meeting new friends, getting our craft on and generally just having a blast!

The get together started on Wednesday for me, with our Leadership training and beautiful Manager's Reception for all those who've qualified as Manager or above in the Stampin' Up! career plan.

This year we were taken for an exquisite dinner in the Myer Mural Hall - a stunning, original Art Deco hall on the top of the Lonsdale Street building. 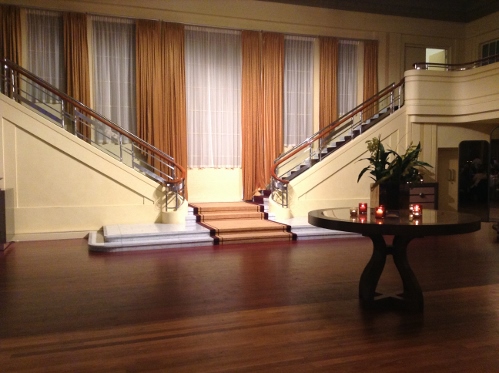 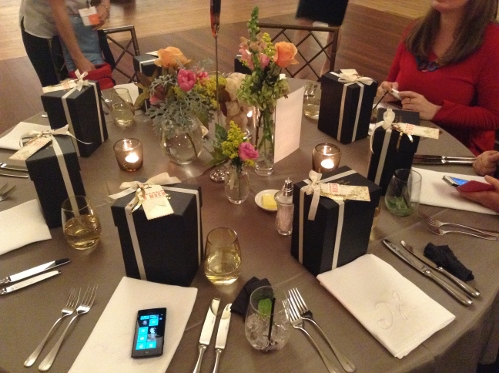 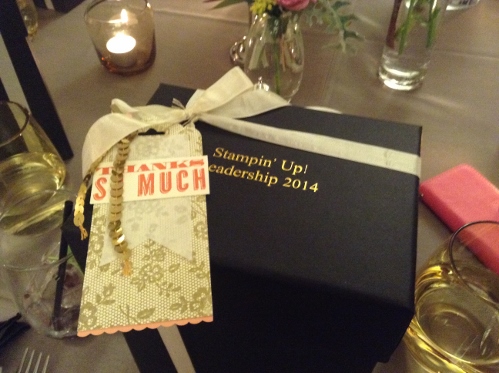 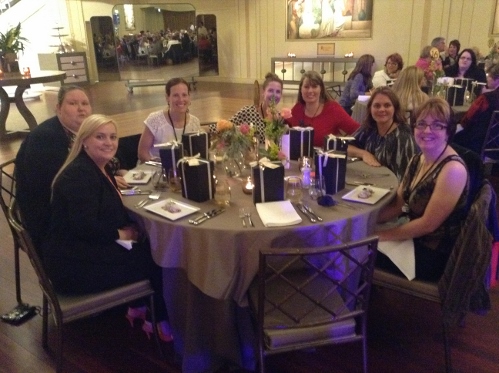 We felt so spoilt! The food was amazing, there was a very talented band playing some jazzy / Michael Buble type favourites during dinner and plenty of dance music later, and each attendee received that gorgeous blue box which contained a divine lacy scarf AND the stamp set they used to make the beautiful tag on the top of the box (LOVE)!!!!

Thursday through Saturday were lots of sessions at the Convention Centre, including training, Make & Takes, break out classes, techniques and demonstrations, our Awards and Recognition night and awesome after party featuring Bjorn Again (OMGoshness, can you believe they got such a huge band for our little old after party?????).

A new feature this year was the Recognition Lounge - a special space where everyone who earned a Performance Bonus or the Grand Vacation during the year could retire to for a coffee and catch up. It was beautiful! 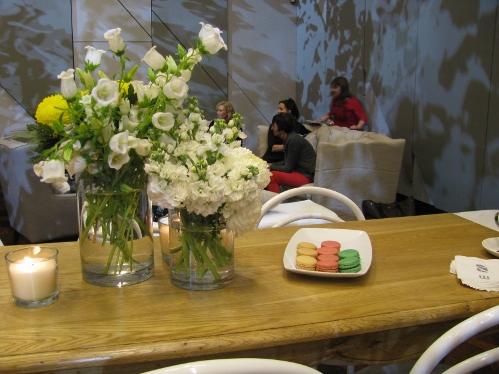 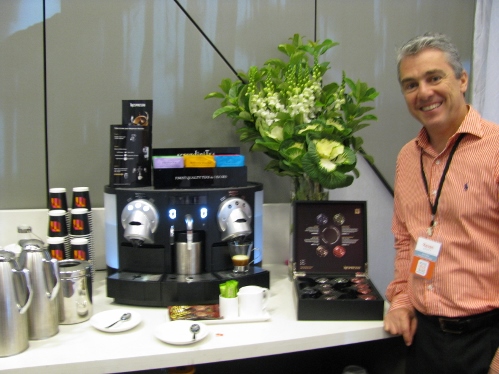 Aaron Scott, the Australian business manager, teaching us all how to make our coffee!! Fantastic machine! Not sure there's enough benchspace in my stamping room for one of those!! I did have a chuckle about the VERY green macaroons! Our Convention was opened by Justine Puy from the musical WICKED (currently playing at Melbourne's Regent Theatre), singing the gorgeous Glinda the Good song - Popular. I just saw the musical on the Saturday before convention, so when I saw those green macaroons . . . LOL!!

I had lots of my team at Inspire Create Share this year, which was just wonderful - being in Melbourne, more of the local girls could come, including 5 who attended their first Stampin' Up! Convention. 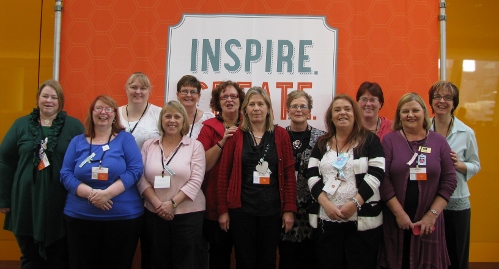 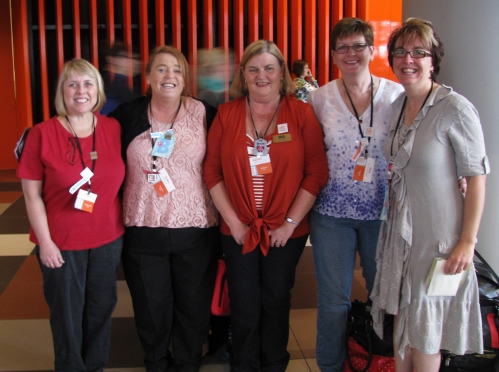 With all those cameras, and all that enthusiasm, we still managed to miss a couple of people from our photos!

Another new item on this year's program was the Service Project. Over the first two days, attendees put together 250 kits (boxes of Stampin' Up! goodness) to go to children who are having their birthday's in hospital. 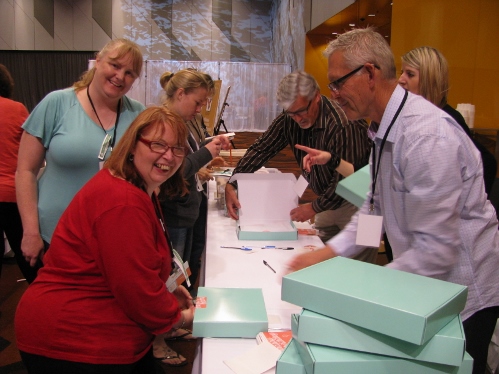 Here are Wendy and Alison putting together boxes, assisted by Sterling Gardner who's wife Shelli is the Stampin' Up! CEO.

We had several hands on sessions with Stamps, Paper and Ink!! Here's a little sneak peak of a project we made during the workshop sessions. 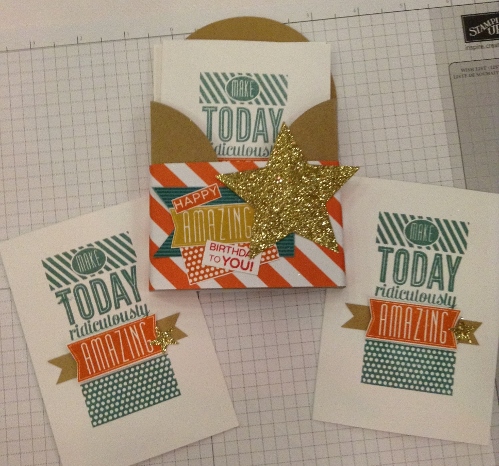 I can hardly believe it's over for another year!!! Did you know guests can come too?  And that Manager's and above get all this goodness for FREE???

How does that work?? Well, there sure are some perks to being a Stampin' Up! demonstrator, building a business - even in a small way!

I'll be back tomorrow to give you some more information about that!

Hey Everyone! How are have you been??

I've taken most of April away from my Stampin' business to take care of some family things, and it's exciting to come back now with a new look, new products to offer and the excitement of Stampin' Up!'s annual convention later in May, lots of new catalogue sneak peaks and exciting things to look forward to in the coming months.

Those of you who are scrapbookers and follow Project Life will probably have already heard that Stampin' Up! and Becky Higgins have partnered to bring us a Stampin' Up! exclusive range of Project Life products - so excited about that and can't wait to get my hands on them!

We can't buy the physical products here in Australia yet, but we CAN get digital downloads of the range, so if you are using My Digital Studio or other online scrapbooking products, you can start to play with the exclusive designs.

Click on the picture to take you direct to my online shop to see the three digital downloads available.

Another exciting new product we can share this month is Photopolymer stamps!

We've been admiring the Stampin' Up! Photopolymer stamps from afar, watching the North American market and wondering if we would ever get them here in Australia. Well, so exciting that this month (and only for May) we have two limited edition sets to try!

If you purchase both sets using the bundle code 138101, you will receive an online class valued at $15.00 for free.

"The Show & Tell 1 and 2 Stamp Sets feature over 60 versatile images that you can mix and match to create personalized backgrounds, patterns, layers, and dimensions to make any project stand out. These sets are featured in our Seeing the Possibilities Online Class, where you’ll learn how to maximize your photopolymer stamp sets. Purchase the bundle and get Seeing the Possibilities Online Class for free! (Class available for download only.)"

I've updated all our Chirnside Park kiosk dates on my Class and Event page, and will be updating my class calendar soon.

Nice to be back again, look forward to seeing you all with ink on your fingers! 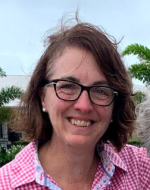 A Note from Kathryn

Promote Your Page Too

Doing What I LOVE!